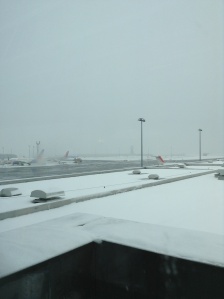 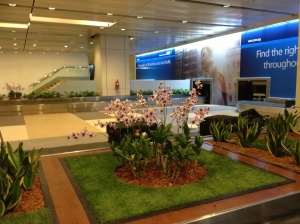 Coming from a large field in a small country in the middle of winter to an island on the Equator the contrast was about as strong as it could be and it took me several days to recover from the long and stressful journey.  When I emerged ready to take Singapore on its own terms I discovered that involved penetrating the paradox of City Garden or Garden City.  There is a big PR push there to create the mythos of ‘Our City in a Garden’ (where the word ‘our’ is probably as important as the other two nouns, a gesture towards integrating the ethnic diversity of Singapore’s population: making me wonder how much of that is wishful thinking too). 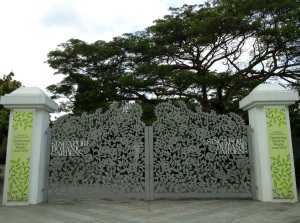 My interpretation of paradox implies balance and union, a sort of yin and yang dynamic.  Here there was more of a sense of ‘disconnect’ – an ungainly word, but one that seems fitting here – suggesting something fragmented and random and echoing the strange syntax and coinings of ‘Singlish’.

In Singapore it would seem clear that City comes before Garden.  There is so much evidence of man’s influence – the architecture an expression of power, dominion.  The sheer scale of it – in conception and execution – high rises and set pieces – made me doubt the constantly reiterated ‘eco’ line.  It felt more as if sustainable measures were just an add-on rather than an integral part of what is obviously a very efficient infrastructure.  The differences between natural and man-made seemed too great, out of balance.  How much solar energy, tree-planting and biomass fuel would it take to keep the lights of Singapore, a 24 hour city, switched on? 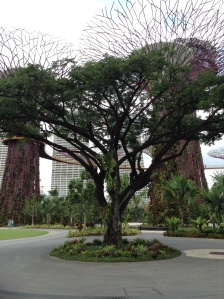 For me City and Garden were two distinct worlds that occasionally overlapped or collided – one superimposed on another, like an old-fashioned double exposure.  There was something old-fashioned about the place despite the glass towers and shiny lights – as if Singapore was tangled up in its dream of economic growth, still in the thrall of capitalism’s hollow promises.  Many of the public information boards, advertising and media were very childlike in tone and design, only adding to the effect of innocence.  There was something very charming about this but it also felt ungrounded and unsustainable.  I’m not sure how the ‘public consultation’ works either.  It all seemed too good to be true.

When Monty Don visited Singapore as part of his ‘Around the World in 80 Gardens’ series, he was very scathing about its defining itself as a Garden City.  He found a community garden project which seemed to him a much more straightforward unequivocal approach – gardening for its own sake.  I saw some evidence of that at the Botanic Gardens where many volunteers with a passion for plants supported the staff of mostly immigrant workers in the maintenance of the gardens.

Whatever ambivalence I feel towards Singapore and its gardens I enjoyed my time there enormously.  It was intense and profound – the plants and trees and animal life expressive of an unfathomable power, as unlike an English garden as it could possibly be.  Immersing myself in it utterly, the wild, unchecked equatorial growth, vestiges of rainforest and the sheer diversity of forms and species left me wide-eyed and often enchanted.

I particularly appreciated getting to know the Heliconia family better, a native of Central America I’d first encountered in the Tropical House at Moorbank.  Last year I wrote a poem ‘about’ it called Adaptation– you can read it on the Dhamma Moon website if you’re interested.  Wonderful to see plants like these out from under glass.