Reading the Flowers began life as a small collection of poems written during a Leverhulme Residency at Moorbank, Newcastle University’s Botanic Garden, sadly now closed. Nine months in a garden isn’t even a full cycle of the seasons so it was natural to want to expand into a longer, more far-flung exploration of what happens in a Botanic Garden, a space where nature and culture meet.

The poems do not document or delineate the gardens I visited so much as put them under the microscope, zooming in on individual plants and processes. They also range beyond the walls of formal gardens, spilling into hedgerow and meadow, wild garden and island. The ‘landscapes budding inside us’ also draw my attention, psychological, social and spiritual concerns mirroring what is translated into botanical classification and horticulture. This thematic diversity is reflected in an abundance of formal strategies and multiple voices telling how their gardens grow.

As a garden is a managed, boundaried green space, so the collection opens with an invitation ‘to enter./Step across the carpet of petunias and fuchsias’, in a poem called ‘Cut Flowers’, immediately placing together the realms of plants and paper in a collaged ‘flora’, signalled by the book’s title. Similarly, the final poem enacts the dynamic of arrival and departure, entrance and exit, via the traditional turnstile gate.   This cycle is built into the poem’s structure, which uses the mirrored specular form. An earlier, simpler version of the poem gave its (then) title, Through the Garden Gate, to the pamphlet it introduced of poems from Moorbank. I’ve enjoyed the sense of evolution and adaptation in the six-year process of gathering this collection together.

The epigraph is from Iris Murdoch’s novel ‘A Fairly Honourable Defeat’:

People from a planet without flowers would think we must be mad with joy the whole time to have such things about us.

This clearly points to its opposite – how people on this planet fail to appreciate the beauty of the flowers that grow all around us and so miss out on a whole world of wonder and delight. Part of the poems’ intention is to encourage the reader (and the writer) to look more closely and not bypass the opportunity to ‘be mad with joy’ at least some of the time. 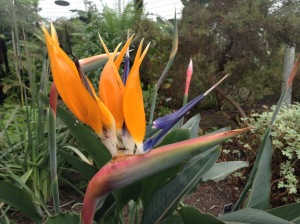 Joy is not the only response flowers elicit. They also inspire gratitude and appreciation, reminding us that we depend upon green growing things for the very air we breathe, by courtesy of the process of photosynthesis. Plants provide us (and other creatures) with food, shelter, medicine, clothing, artistic inspiration, spiritual illumination and hope. The natural world, a traditional symbol of renewal, is currently under threat; climate change, desertification and development, extinction, all shifting the emphasis towards that other symbolic association – impermanence. A flower’s beauty is enhanced by its short life. Although it comes and goes, part of us knows it will return the following year. This is becoming less and less of a certainty, making flowers even more precious, as are all the birds and insects with which we share our gardens.

A sense of ‘kin’, the glittering web of interdependence, is taken up in the poems capturing memories of family, nurture and roots. Love too is nourishment, offering the possibility of (re)generation.

Travelling ‘away’ to gardens across the globe, the concept of ‘home’ is investigated – a source of identity, presence, desire and nostalgia. Its dark side is revealed in poems triggered by the colonial agenda of the 17th, 18th and 19th centuries, reflected in the horticultural and botanical imperialism of plant collection and classification. War, violence and environmental disaster are also part of the garden’s story.

Ultimately, however, the balance is tipped in the light’s favour, the therapeutic effects of time spent ‘reading the flowers’ undeniable. In many languages this has a double meaning of ‘picking the flowers’, recalling the origins of our word ‘anthology’, from the Greek meaning ‘a gathering of flowers’. The implication is that reading about flowers has a similar effect to closely observing flowers. Many gardeners write extremely well about the plants they spend so much time nurturing. Many others enjoy reading what these gifted writers have to say, particularly during the winter months when short days and harsh weather keep those of us in the northern hemisphere indoors.

Reading the Flowers follows the long line of poet-botanists/horticulturists such as Goethe, Erasmus Darwin, D.H. Lawrence, Vita Sackville West, Michael Longley, Louise Glück and Sarah Maguire. It is not a garden manual but, unlike the cherry blossom itself, a poem evoking cherry blossom will never lose its petals; absent loved ones live and breathe on the everlasting span of a page: both plants and poems naturally ‘our highest currency’. Looking at flowers is a lesson in transience, an encouragement to make the most of these small, brief miracles in our lives that are so easily overlooked.