Flowers and the Female

I’ve been very much enjoying having some Cerinthe in the house (or Honeywort – as they’re beloved by bees) – a present from my friend Susie, grown in her beautiful Allendale garden. Although only an annual, it is has survived all through this winter.  I have a new plant of my own, with no flowers just yet, but it’s looking happy enough. 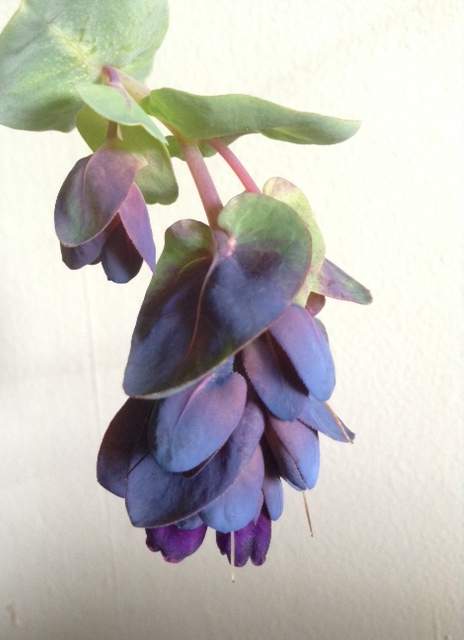 I was pleased to learn that the name Cerinthe comes from the Greek – keros, for ‘wax’, after the almost fleshy texture of the leaves and bracts;  anthos means ‘flower’ (which gives us the word ‘anthology’).  To my ear it still sounds like a woman’s name.

Why is it girls are often named after flowers but no one thinks to name a boy after one?  I can only summon up Rowan Atkinson (strictly speaking a tree, for which there might be different rules) and Lupin in The Diary of a Nobody.  Anybody know any more?

The Politics of Bees 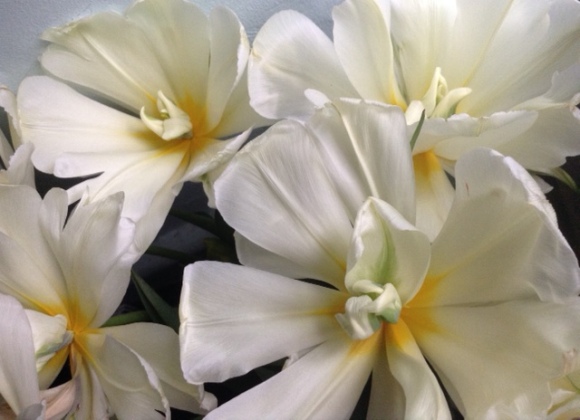 Yesterday I received an email from Friends of the Earth about the ‘Bee Action Plan’.  Unsurprisingly, even through it’s great that it’s on the political agenda at all, things do need to go further.  Please check it out on their website and sign the petition and share it as widely as possible with your friends and contacts.  As the flowers come back into bloom, there isn’t much that’s more important than the health of their pollinators…

It’s almost three years since the Bee Cause launched. In that time I’ve seen you take action to save bees in so many ways. You’ve signed petitions, planted wildflowers all over the country, built bee hotels, added your name to newspaper adverts and even organised Bee Teas with your MP.

Now I need your help again.

Lord de Mauley, the Bees Minister, wants to hear what you think of his Bee Action Plan. But time is short. In one week the door on his consultation will close.

I’ve seen the Bees Minister’s plan for bees and it’s a good start. But to truly reverse bee decline I think it needs to be much better. Almost 20,000 people have already signed the petition for a Bee Action Plan that will do the job.

It’s crunch time for bees. Please take a moment and add your name.

The bees are depending on you.

Lucy & the Bee Cause team

Honey From The Hive

I’ve been wanting to read Sean Borodale’s book about bees since it came out a couple of years ago.  Finally this weekend a long train journey gave me the perfect opportunity.  Bee Journal (Cape 2012) won that year’s T.S.Eliot Prize and various people had talked glowingly of it to me.  I’d also heard other, less complimentary, reports – certain readers quite vehement in their dislike.  I was fascinated by this polarization of opinion and wondered where I’d find myself on the spectrum.  It’s interesting to reflect what we bring to reading a new collection (particularly by a poet new to us) before we even open its pages – so much expectation and hype to negotiate.  On the back of the book Carol Ann Duffy declares Sean Borodale is ‘without doubt the most exciting new poet I have read since Alice Oswald.  His Bee Journal raises the bar for us all and announces a thrilling new voice in British poetry.’  Simon Armitage calls it ‘honey itself in poetic form, a sustained tour de force of language and thought.’  In my experience having your expectations raised too high is often dangerous – whether it be for a book, a film, play, exhibition, or even a garden. 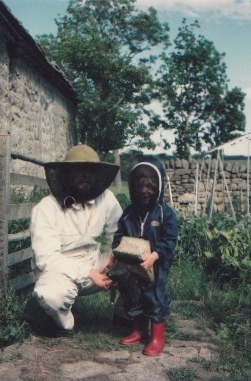 But I did want to like this book.  Back in the ‘80s, living the good life, we kept bees for a decade or so.  Looking it up in the journal we kept of those early years on the hill, I discovered we bought our first two WBC hives on 28th August 1981 for £60 (plus another tenner for various bits of equipment) from a Mr Jamieson in Corbridge. The management of several hives became part of our lives, a dish of delicious honey oozing out of the comb a standard fixture on our kitchen table.  Funny, now they’re grown, my two sons have no taste whatsoever for anything sweet. We also had a go at making our own foundation and candles fashioned out of the honey-scented wax.  The hives were moved (rather perilously in the back of our van) up to the heather in the late summer months to give the honey that distinctive strong flavour.  Bee-keeping is messy, demanding and occasionally painful, but immensely rewarding.

The whole culture is ancient, romantic and deeply resonant.  Poets – from Virgil to Sylvia Plath to Carol Ann Duffy and Jo Shapcott – have always been drawn to writing about bees.  Recent environmental pressures resulting in the decline of the bee population has added a new frisson to the honeycomb of associations.  When, or if, all the bees die, it has been suggested we will only have four years left to survive ourselves. 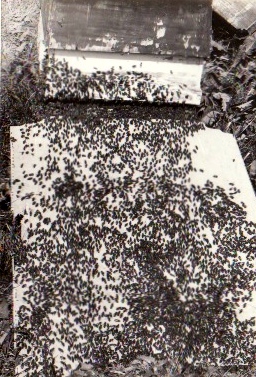 Sean Borodale presents this collection literally as a journal: the blurb claims he wrote it ‘at the hive wearing veil and gloves’, but, knowing how big and clumsy the gloves are and how much you have to think about with your head in a hive, I’m not so sure.  My first impression was of a dense, self-conscious use of language – a strange, ungainly mixture of poetic and technical vocabulary, straining for effect.  There’s a real sense of haste, of ‘notes towards’, a raw energetic awkwardness that is startling, unsettling.  It is not until the cycle of the second year that I was quite able to catch the voice and be drawn into its wild momentum.

It’s as if Borodale needed the first year to properly come to know the working of the hive and locate the language to match it.  He can then evoke a feeling of intimacy and connection – and real jeopardy in the responsibility for caring for his colony.  A recurring image is of the hive as a ‘mind’, a collective consciousness.  He’s also intrigued by the different sounds emitted by the bees, their music and what the changes of tone communicate.

By the second July, after the earlier intoxication at the novelty of the venture, a darkness starts to filter in.  There is anxiety, danger, intimations of ‘theft’ in taking the honey from the hive.  I enjoyed this shift in mood and texture and could identify with the highs and lows of the beekeeper, the mirror of his own mind. Tempered by a new vulnerability and humility, the writing reveals itself as brave and original, fuelled by an almost feral abandon, that to my ear sometimes works and sometimes doesn’t.  Alice Oswald is right when she says these are ‘pre-poems, note-poems’: ‘a kind of uncut home-movie of bees.’

She likes its ‘oddness and hurriedness, its way of catching the world exactly as it happens in the split-second before it sets into poetry.’ I occasionally found it irritating –  tending to the self-dramatising, intoxicated with itself, trying to communicate more ‘beeness’ than the language or form can hold.  I wondered if it might work better as a film (Borodale’s usual area of operation) – a more ephemeral form; the diary structure possibly asking for more factual documentary treatment than poetry inherently permits.

Running alongside my questions about the poems, I cared deeply about the bees and was as devastated as Borodale himself when the verroa mite is discovered in his hives.  On 24th/25th January there is no poem just empty white space below the stark heading ‘BEES DIE’.  His portrait of the dead queen is wonderful – a careful sketch, infused with wonder and loss.

Six months later a nearby swarm offers itself for capture and Borodale is convinced these bees are related to a previous swarm from his own hive.  He collects them to form the nucleus of a new colony and the cycle can begin again.  Towards the end he writes this line:

You are not fully ordinary, bees.

I felt the same about his poems – not fully ordinary, perhaps because not fully formed. But their risk and dash stretches what we think of as poetry, broadens our expectations.  Don’t we read poetry for different reasons at different times?  I read this more like I might read prose – for the ‘story’: information, drama and nostalgia.  It left me with a longing to dip a spoon into a pot of honey and let the taste of it on my tongue take me back to a hilltop in the Tyne Valley.

The pictures are from some old albums: In black and white, capturing a swarm in an ancient skep and then directing them into an empty hive; Simon and Rufus all suited up and ready to smoke the hives for inspection; our own little B – veiled; Cake in honour of his 6th birthday – 25 years ago.

Find out more at beesinphilosophy.wordpress.com