On Wednesday I paid a visit to the North East’s first Big Eco Show at the Stadium of Light.  I wanted to know what a community I wasn’t familiar with were saying (and doing) about Climate Change and related ecological issues.  It was heartening to see such a focussed and energetic exchange of information.  It seemed a fitting venue for this current work that is asking for our unified attention – almost a shrine to collective effort, celebrating two of the North East’s abiding stories – football and mining.

It could be seen as self-interest that businesses should prioritise environmental considerations, or even see them as commercial opportunities, but I got the sense that this wasn’t a cynical exercise.  Most of the people I spoke to did seem to have the planet and its population’s interests at heart.  It was good too to hear how much government legislation is increasingly holding businesses to account.

Many set-ups in the North East have found themselves seriously suffering after what one speaker called ‘Thunder Thursday’.  It is anticipated flooding will only increase in the coming years and so businesses need to build their resilience, speeding up recovery time.  Various organisations are working towards helping folk make this possible.  The way LOCOG handled sustainability in their development of the Olympic Park kept being mentioned as a model: that environmental awareness can no longer be an optional extra and needs to be an integral part of a project or practice’s raison d’être.

I had the start of what I hope will be a continuing conversation with Teeside University about the carbon footprint of my Botanical project, my ‘Resource Efficiency Pathway’ (lots of Newspeak opportunities here!)  Given its scope, it’s important that I should build this into my approach to the work and find as many practical, creative solutions as possible.

If anyone has any helpful suggestions, I’d be very happy to hear them.  Do post a comment below.  Thanks.

I’m writing this on the morning of the Autumn Equinox, sitting in my garden, enjoying the level light and mild air.  Tomorrow I go to Harnham for a week, on retreat – a deeply sustainable way to begin this project I think, where I want to bring a thoughtful spaciousness to both how I write and what I say on this loaded subject.  And particularly not fall into the trap of being worthy or didactic about it.

As I sit, Bruno the postman brings a mixed assortment of brown envelopes.  The most uplifting contained a new pamphlet – Earthwords, poems to celebrate 40 years of Friends of the Earth.  In it Gillian Clarke writes ‘A love song to the earth is more powerful than a sermon’.  There are a couple of poems of mine in it, including this one, set up at Dhanakosa, on the edge of Loch Voil in the Trossachs:

AT THE RETREAT HOUSE

In the midst of the wild, loch on one side,
mountain on the other, someone’s planted
a garden. It takes more than hope
to barrow ten tons of gravel and spade
and rake it level round L-shaped beds,
to coax those plants strong enough to dance
with the season’s short span into flower –
tangled nasturtiums, astrantia’s tethered stars.

It’s a gesture towards what’s possible,
our instinct for cultivation, how much care
we bring to the landscapes sculpted
inside us. At its heart, a hedge of box
shelters four pear trees trained in a spiral
towards open sky, the promise of harvest. 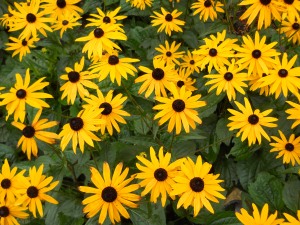