No Smoke Without Fire

When my camera broke recently, I dug out my old one to take some photos.  I discovered some images on it from when I last used it a couple of years ago.  These were of a bonfire at Moorbank in January 2011, built to burn the various branches that had to be felled because of snow damage during the particularly intense winter that year.  One of the biggest casualties in the garden was the old Strawberry Tree (Arbutus unedo) that had stood guard over the entrance for many years. 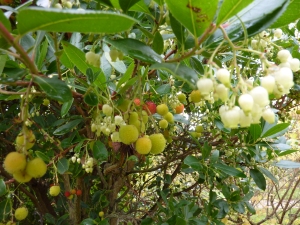 I’d never seen one of these trees before and used to taste one of the fruits whenever I walked in –not the loveliest of flavours, but somehow cheering.  I was entranced by the way the fruits and the flowers were always on the tree at the same time – scarlet berries alongside creamy-white, waxy bells.  A native of Ireland, as signalled by one of its names – the Killarney Strawberry Tree – this unusual plant also appears in the Mediterranean and is the symbol of Madrid, reflected in the liqueur made from its fruits – madrone.  Hieronymus Bosch painted one in his Garden of Earthy Delights triptych (c.1490/1510), which currently hangs in the city’s Prado Gallery.  I have since seen specimens in all three of the Botanic Gardens I have visited recently – Padua, Sheffield and Oxford (the source of the first two photographs here). 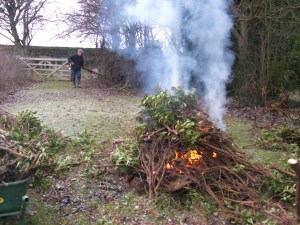 If all those various associations weren’t enough, it became a powerful symbol of the garden at Moorbank for me during my residency for the way its collapse under the weight of the snow showed what the gardeners there, all volunteers, were made of.  While I was still mourning its loss, they were cutting it back, gathering up the branches to be burnt and planning what might be planted to replace it.  Literally looking on the bright side, they were pleased at the possibility of more light finding its way into that end of the glasshouse.  I was deeply impressed by their groundedness and pragmatism – the way all good gardeners must look to the future.

Some of that same spirit was in evidence today at the Open Meeting to explore possible ways forward with the future of Moorbank, since the University has made the decision not to renew the lease with the Freemen of Newcastle.  The valiant volunteers – the Friends of Moorbank – led forums on the different areas this green space in the heart of the city now needs support with – gardening, business planning, finance and marketing/events.  Around 150 people attended, bringing some wonderful ideas and energy to the discussion.  Everyone’s input will be pooled to take the garden onto the next stage of its transition.  Knowing what determination and commitment the Friends of Moorbank are capable of, I look forward to seeing where this might lead.  It was good to come home with the sense that Moorbank has clearly made lots more Friends at a time when it needs as many as it can get.

Bosch’s paradise tree waved them past
the gate, scarlet berries winking on dark stems
beside waxy bells, a tumble of cream and pink.
Some said the fruit tasted of nothing – one
was enough; food for the birds. Others let
the flesh ferment into Spanish liqueur.

At the end of November the snow fell,
snow like no one had seen before;
their Eden lost in the sky’s dreaming.

The old tree couldn’t bear the weight
of its white coverlet, creaking till its trunk
and branches split, exposed the chilled bones
of a dying year.
Earth like stone
under their boots, the gardeners went back
to work, tramping through snow with sawn
and fallen boughs to coax into smoke.

Flames shone on their faces as the fire took hold;
flakes of ash fingered their shoulders like frost.
The incense of burnt heartwood rose.
As if such wild heat could melt a hole
in the heavens, that afternoon saw more snow;
zodiac of a virgin year turning.

They tilled the calendar with spades and hoes,
telling the legend of that winter, what had passed,
the snow, the fire, the strawberry tree.

Yesterday the Financial Times published an article on Moorbank you can read here  – and you can also become a Friend yourself on Facebook here.