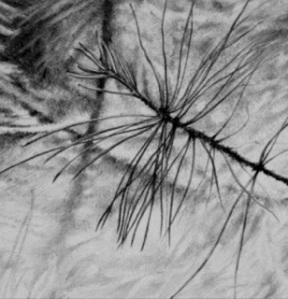 Reblogging Rebecca’s piece about the garden in Arizona touched upon an area I’ve been roaming around ever since I began to write about plants:  the difference between reading-based research and first-hand experience, between representation and phenomenon, and how that’s reflected in my writing.  I’m trying as much as possible to spend time really looking at the plants and gardens I’m writing about, making notes in the field in the same way an artist makes sketches, catches a sense of the moment.  It encourages me to stay still and really get to know a plant or a tree and for that understanding to be based on the actual truth of the plant’s morphology, condition and habitat, rather than simply being an excuse to indulge my fantasies.  There is freedom and delight in this deep appreciation of what appears to be other – harmony between the seer and the seen.

The artist is a beholder.  The artist carves with his eyes.

This week I’ve been writing about Miró’s The Tilled Field, a 1923 painting that has stayed with me since I saw it in the Tate’s retrospective a few years ago.  Working from an image on the screen of my laptop was better than nothing, but frustrating.  I was aware of my eye skimming over the surface, missing the evidence of a human hand directing the brush, the sense of 3-dimensionality.  Because the mood of the painting is one of idealism and nostalgia I was able to persuade myself working from the virtual rather than the visual might be okay.  As I said, better than nothing.  Maybe.

Perhaps it’s also comparable to the difference between reading a poem on the page and hearing it read aloud, live, by the poet herself.  Many people commented on that at the recent launches of Border Song – another piece of work that couldn’t have happened without field trips, this time along the North Tyne valley.  Direct experience was filtered through an investigation of the Old Testament Song of Songs – a balance that suited my need for both the physical/natural and the intellectual/cultural.

Being present and really looking is not as easy as it sounds.  We get in the way, and the world gets in the way, preventing us from seeing what’s in front of our eyes.  The mind will always struggle to go somewhere else; the flow of impressions and digressions and voices in our heads like a badly-tuned radio.  Writing in a garden helps me tune in and settle down, find the serenity to let my mind open enough to see what’s really going on and let the marvellous layers of it sink in.

Looking is as creative as making as long as it is possessed of the art of seeing.