How do you write about Climate Change? 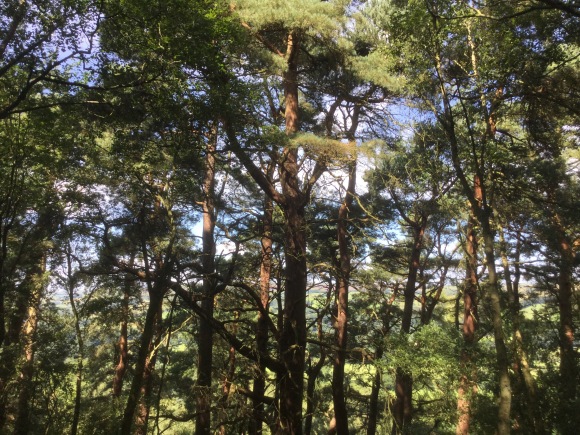 The only way I can begin to think about the question of how to write about Climate Change is to do it – start writing and see if I can spin a thread for myself, and maybe others, to follow.  This will be the first in what I hope will be a series of posts to track my spinning.

In September I submitted my Creative Practice-based PhD – Women on the Edge of Landscape – investigating place and ecology, poetry and biography.  I’ve written a collection of poems called ‘The Knucklebone Floor’, set at Allen Banks in Northumberland, imagining the 19th century widow who intervened in the landscape there – Susan Davidson (1796-1877) – as well as other women who have lived, worked and walked there before and since.  I tried to find a voice for them all, acknowledging points of difference while testing the possibility of commonality, a collective vision of an authentic good, dwelling alongside the constantly changing beyond-human.

I called my critical reflective essay ‘Flower Album’ because I wanted it to be a place where I could assemble my ideas, process and reading, using another Victorian woman, Margaret Rebecca Dickinson’s (1821-1918) beautiful watercolours of native wild flowers as touchstones.  These two very different northern women held a love of, and intimacy with, the natural world in common.

After over three years of looking at the macro-perspective of this particular landscape and the micro-view of the plantlife that grows there – all at a time of increasing urgency about Global Warming and Mass Extinction – I felt my own sense of intimacy with the land at Allen Banks deepen and grow.  I became one of its creatures as much as the dormice, dippers and dragonflies who’ve made their homes in the woods and along the river.  My essay’s ‘conclusion’ culminated in a call for tenderness, a conscious love for the earth that stands in the way of any harm being done to it, just as you would protect your own (or anyone else’s) children.  Not on my watch. 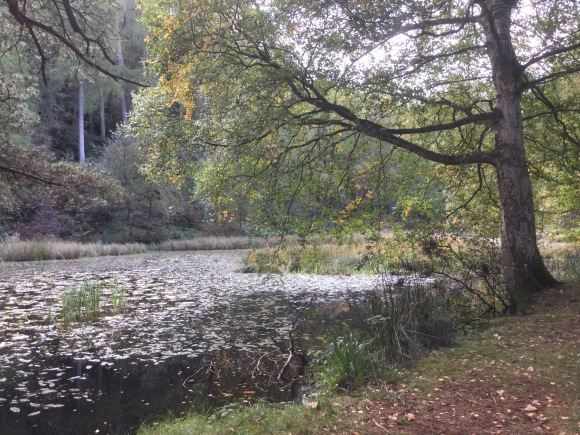 If ‘Climate Change’ is portrayed as our enemy, if the phrase ‘Climate Emergency’ is intended to summon up associations of wartime solidarity, I am concerned that the dynamic evoked, the story conveyed, is an unhelpful one, leaning more into conflict than healing.  Such attitudes tend to demonise Climate Change as just another ‘other’, to be hated and eradicated.  When will we learn there is no such place as ‘away’?

If we know ourselves to be truly part of nature, inextricable from it, inside and out, isn’t it more fruitful to examine the part of ourselves that needs to affirm the polarity of Self and Other?  What if we tried to come to terms with that part of ourselves that has contributed to Climate Change, allowed it to happen without doing anything to prevent it or radically alter the political structures that perpetuate our current crisis?  Surely Climate Change is less the cause of our current crisis than the effect of what Naomi Klein calls ‘the deep stories about the right of certain people to dominate land and the people living closest to it, stories that underpin western culture’.  I admire the way she has ‘investigated the kinds of responses that might succeed in toppling those narratives, ideologies and economic interests, responses that weave seemingly disparate crises (economic, social, ecological and democratic) into a common story of civilisational transformation.’

It’s important to be pragmatic and vote for the party you can trust to take action to protect the environment, but in the longer term, the system itself needs to change to ensure greater equity and justice – not just in this country but on a global level.  How to achieve that is another question we will be struggling with in the years ahead.

Tenderness is not really a word that comes to mind listening to the politicians making the case for their party’s extravagant promises.  But reading Mary Robinson’s Climate Justice: Hope, Resilience, and the Fight for a Sustainable Future is maybe the nearest I’ve got to it.  Telling stories of women around the world directly affected by Climate Change, she makes politics personal.  She remembers one woman in drought-stricken Honduras saying to her: ‘We have no water.  How do you live without water?’  Worrying about flying and driving and our various western consumer dilemmas, we really have no idea.  These women trying to look after their children in the face of unimaginable deprivation and disruption are, as Robinson says, ‘the least responsible for the pollution warming our planet, yet are the most affected.  They are often overlooked in the abstract, jargon-filled policy discussions about how to address the problem […] the fight against climate change is fundamentally about human rights and securing justice for those suffering from its impact – vulnerable countries and communities that are the least culpable for the problem.’

On the day that Mary Robinson became the United Nations High Commissioner for Human Rights in 1997, Seamus Heaney wrote to her saying: ‘Take hold of it boldly and duly.’  That is what she is doing on the subject of climate and its impact on human rights.  What would it look like if contemporary writers took hold of our current task ‘boldly and duly’?  How would Seamus Heaney write about Climate Change?  In what form would he express his grief for everything we have already lost?  What are the words we might start hearing in unexpected places that could help us adapt and thrive?

Isn’t it the writer’s job to write so that people want to read or listen, so that what they’ve read or heard stays with them, strengthening their relationship with themselves, the world and each other?  How do you write about Climate Change so that people want to keep on reading, not flick past in search of something more entertaining or distracting?  For me, Voice usually matters more than Story – a form of words shared in passing that gives a sense of the writer’s pulse, the thrum of their beating heart, the intimacy with their conspirators I saw in the work of Susan Davidson and Margaret Rebecca Dickinson and have tried to translate into my own words.

Still inclined to spend some time in the 19th century, I’m currently listening to Samuel West’s reading of Thomas Hardy’s The Woodlanders and although the story is beguiling, fateful and compelling, it’s the atmosphere I love best, the sense of place, particularly as it’s evoked by Hardy’s own intimacy with those trees growing in Little Hintock, characterised almost as vividly as Giles Winterborne, Grace Melbury and Marty Short.  If we knew trees in their natural habitat as well as this, perhaps we’d care for them better.

Although the time of bare boughs had now set in, there were sheltered hollows amid      the Hintock plantations and copses in which a more tardy leave-taking than on windy          summits was the rule with the foliage. This caused here and there an apparent mixture of the seasons; so that in some of the dells that they passed by holly-berries in full red were found growing beside oak and hazel whose leaves were as yet not far removed from green, and brambles whose verdure was rich and deep as in the month of August. To Grace these well-known peculiarities were as an old painting restored.

Now could be beheld that change from the handsome to the curious which the     features of a wood undergo at the ingress of the winter months. Angles were taking the place of curves, and reticulations of surfaces – a change constituting a sudden lapse from the ornate to the primitive on Nature’s canvas…

We can only write from a sense of who we are, the wild landscape of our hearts and minds.  The writing process depends upon our own unruly growth, the ways we choose to cultivate and nourish our imaginations and fill our days.  Seamus Heaney said that too – that it’s what we do when we’re not writing that matters.  Spending time with trees, observing their changes through the seasons, planting and protecting them – this too is the writer’s task and will send roots down into the thirsty soil of our collective imagination.

Naomi Klein has been encouraging people to read Richard Powers’s The Overstory.  I’m late to the party but it’s next on my reading list.  She says:

It’s been incredibly important to me and I’m happy that so many people have  written to me since. What Powers is writing about trees: that trees live in communities and are in communication, and plan and react together, and we’ve been completely wrong in the way we conceptualise them. It’s the same conversation we’re having about whether we are going to solve this as individuals or whether we are going to save the collective organism. It’s also rare, in good fiction, to valorise activism, to treat it with real respect, failures and all, to acknowledge the heroism of the people who put their bodies on the line. I thought Powers did that in a really extraordinary way.

This weekend the Woodland Trust’s Big Climate Fightback aims to encourage a million people in the UK to pledge to plant a native tree.  They have a target to plant a tree for every person in the UK by 2025.  We have a small oak seedling from a friend’s garden we’ll be adding to the recent replanting of the woodland behind our house. While you’re considering how a writer might write about Climate Change, what you need to read about it or who you’re going to vote for, you can pledge to plant a tree or support the Woodland Trust here.

I’m spending a lot of time at Allen Banks these days – stepping out of the garden into the wild.  It’s the site for my current PhD research at Newcastle University and I’m looking at its history as well as its ecology towards writing a book-length sequence of poems.

As part of my endeavour to consider it as a collective site, it seemed natural to invite a group of folk to participate in a walking renga at the end of the summer, on the brink of my starting my second year of study.  We walked on the East side of the river, up through Moralee Woods to the tarn, stopping along the way to write and share our verses.

Here is the renga we made together:

the seventh month is our ninth

what is that sumptuous smell?

she only knows it

a choice is made

to keep to the middle way

through the ghost of a window

we gaze over the valley

my companions are painting light

a stack of wooden bones

and so we lean

in a wild grove

with all that’s unspoken

A 14-verse Renga at Allen Banks,

Sound artist and fellow PhD student, Martin Eccles recorded the day and you can read his own renga here.  As well as writing our collaborative version, this time I encouraged everyone to keep all their verses and make their own individual renga, imagining them all as parallel shadows of our shared experience.