Easter, a stone rolled away

The note of hope is the only note that can help us or save us from falling to the bottom of the heap of evolution, because, largely, about all a human being is, anyway, is just a hoping machine.

…I want to propose an existential creativity. How do I define it? It is the creativity wherein nothing should be wasted. As a writer, it means everything I write should be directed to the immediate end of drawing attention to the dire position we are in as a species. It means that the writing must have no frills. It should speak only truth. In it, the truth must be also beauty. It calls for the highest economy. It means that everything I do must have a singular purpose.

Sometimes I think we must be able to imagine the end of things, so that we can imagine how we will come through that which we imagine. Of the things that trouble me most, the human inability to imagine its end ranks very high. It means that there is something in the human makeup resistant to terminal contemplation. How else can one explain the refusal of ordinary, good-hearted citizens to face the realities of climate change? If we don’t face them, we won’t change them. And if we don’t change them, we will not put things in motion that would prevent them. And so our refusal to face them will make happen the very thing we don’t want to happen.

We have to find a new art and a new psychology to penetrate the apathy and the denial that are preventing us making the changes that are inevitable if our world is to survive. We need a new art to waken people both to the enormity of what is looming and the fact that we can still do something about it.

We can only make a future from the depth of the truth we face now.

staying in the blood beat

of the don’t know

(I am still making)

Scourings from an old notebook 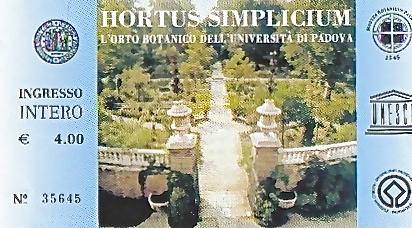 The Botanical Garden in Padua is all about the number 4 – four quarters, four fountains, four gates, four compass points, four seasons.  This patterning gives the garden a sense of stability, a solidity close to the earth.  Strong physical groundedness is matched with a pleasing intellectual rhythm, an orientation in both time and space.  There is the feeling of being located within a wider order, reminded of the four elements, the four winds, the four humours, the four phases of the moon – Renaissance ideas of harmony, the music of the spheres.

In a place so thoroughly governed by the number four, things make sense: it feels comfortable, secure, natural.  Even though, of course, it is all man-made.  But the men who made it (and in 1545 it would have been men), designed and dug and planted it, were looking at and listening to the world as if they’d just been born, asking questions, alive to their close connection to the land, the universe and their dance within it.

Vice-Prefect Antonella Molla gave me a book, a facsimile of L’Horto de i Semplici, published in Venice in 1591.  After a foldout plan of the garden, there is an alphabetical list of plants growing there, followed by a series of empty, numbered lists, arranged under the headings of the garden’s four quarters, for the students of the time to locate the plants in the garden and enter their names in the right place on the lists. A wonderfully simple way to encourage close observation and the process of identification.

What we don’t know, this being pre-Linnaeus, is what many of the plants listed actually are.  Venus’s belly-buttons?  Light hearts?    Bearded priests? 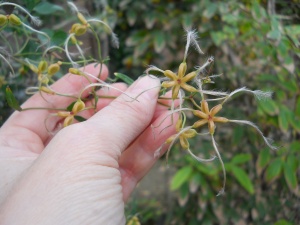 Here’s an extract from my notebook, written in the garden on Saturday 13th October:

This morning there are gardeners where yesterday afternoon, there were none.  They are planting and pruning, raking and barrowing – purposeful but relaxed.

I’ve come to sit by the statues of Solomon and the Four Seasons – intrigued by the way they’re placed just outside the circle and although set at some distance from each other, seem to look at each other:  Busts of Spring and Summer (female) and Autumn and Winter (male).  Solomon in the middle, holding a book and looking up to the heavens, as if for inspiration. 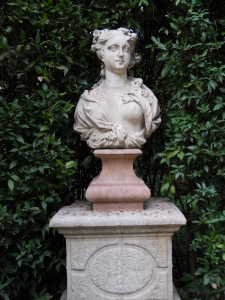 Spring is a young woman with flowers in her hair.  Summer is older, plumper.  Both women bare one breast, their left – but still manage to look serene, elegant, draped in carved folds of cloth, jewels in their ears, round their necks.

They are set against a tall, curved hedge of clipped bay, glossy with last night’s rain, sweet and aromatic pressed between my fingers.

I can hear the fountain trickling into its pool of water, contained within a circle of stone bracketed with metal bars.  The green surface of the water is almost covered with lily pads, a different green, submerged at the centre, lightening and rising towards the circumference.  And then the gardener, patiently raking leaves from the gravel paths.

To the right of Spring, there is a weeping white mulberry (Morus alba pendula).  Standing inside it, you are held in a circle of green light.  At her feet (if she had any) a small box tree with fresh new growth at its tips, trimmed into a small sphere.  Instead of feet, Spring has a cream-coloured pedestal topped with another, smaller, carved from pink stone.  She is marble, streaked with black dust from the cones of the Cupressus arizonica above her head.  She is less pretty close-up, slightly worn and no jewels as I’d thought earlier.

I prefer the maturity of Summer, on the brink of ripeness.  Her marble’s streaked with soft grey veins and she has a dimple in her chin that makes her look more human, less of an ideal.  She is looking at Winter (her seasonal dance partner?), an old man draped in furs with what look like winter fruits in his hair, maybe gourds or cones?  He has a tight mouth, thin lips, as if he’s lost his teeth, but is still noble with his strong nose and luxuriant beard.

Autumn clearly fancies Spring.  He has a touch of middle-age spread, a bon viveur, grapes and dates in his hair, a fleshy mouth and laughing eyes.  But there are bags under them, hinting at a vulnerability beneath his carpe diem attitude, knowing Winter’s not far behind.  Each season doesn’t look at the one next to them – perhaps too redolent of their own demise, preferring the symmetry of the Other, their polar opposite by which they might measure and balance themselves.

And then in the middle of the group, Solomon, making some sort of judgement with his book and what was once a sword.  Choosing between seasons?  Between male and female?  Between youth and age?  An impossible decision.  The circle of the pond in front acts as a sort of answer – unintended or not – a Zen-like taste of union and openness, continuity and change. 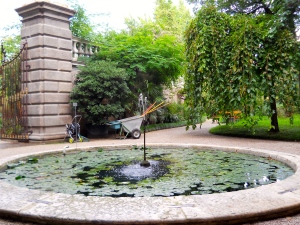