Garden in the City of Cutlery

On a day when the world’s turned white and wintry, I’m sifting through my notes from the autumn trip south.  This is an abridged version of my notes on Sheffield Botanical Gardens. 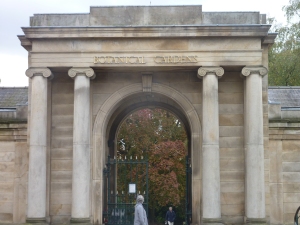 A Monday morning, the end of October.  Up to now it’s been ‘I’ – today it’s ‘we’.   Across the busy road, we walk through the open gate, under the arch of milky stone, neo-classical and confident.  Everything about this invitation to enter communicates certainty, stability and security, announcing itself as Victorian and Yorkshire, with a brusque, no-nonsense pride.  The northern flank of the gatehouse is a shop selling postcards, books, pocket money toys and botanical ‘souvenirs’, many of which seem to have very little to do with actual flowers.  The southern flank is an information office, closed for half-term.

Passing quickly through, we are welcomed on the left by a strawberry tree, fat scarlet berries next to waxy cream flowers amongst sturdy evergreen leaves.  Arbutus unedo – we eat just one, as the name suggests.  The taste is nothing like a strawberry – no juicy citrus edge – plain and business-like, better than nothing but best for jam, wine or hungry birds.  It is so pretty and surprising, a treat to see it there, the first thing in the garden. 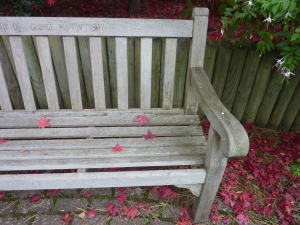 We decide to make a circle of the triangular-shaped gardens, restored to their original ‘Gardenesque’ style, and stroll anti-clockwise, beginning parallel to the road just on the other side of the railings, which used to be a high wall when the gardens were first built in 1836 and you had to pay a shilling to get in, beyond the pocket of most of the working people of Sheffield.  Along that top edge they’ve made a Four Seasons Garden, designed to provide plants of interest all the year round.  The most striking shrub has small pinky-red fruits, rather hard and patterned with dots like a cone.  It is unfamiliar, mysterious and has no helpful black label telling us its name, introducing itself and allowing us to feel as if we ‘know’ it. We’re drawn to investigate this alien plant but it resists interpretation, impossible even to know if it’s safe to eat the fruits.  We collect one that’s fallen on the ground and later when we come across one of the gardeners, all dressed in green, he tells us that it is Cornus kousa ‘Norman Haddon’.  He also says that you can eat the fruits but he’s heard they don’t taste very nice, although he’s never tried one himself.  We don’t either – not driven by hunger to risk it. 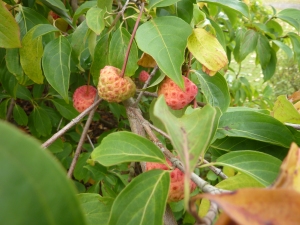 A landscaped mound planted with ornamental birches marks the far corner of the garden.  Below it there is a restored version of the original wrought iron turnstile gate, the word ‘IN’ set in the stretch of shiny black verticals.  At the end of each day a bell is still rung to let folk know the garden is closing.  Like a short, concentrated walk across the globe, we pass borders dedicated to plants from the Mediterranean, Asia and the Americas.  Most of the flowering plants are dying back now and it’s the trees that are getting all the attention.  The tame grey squirrels are busy being busy as if it were their best time of year too.  The ground is carpeted with swirls of yellow, brown and rust red – the strongest colour in the garden, despite the efforts of the gardeners with their leaf blowers and wheelbarrows. 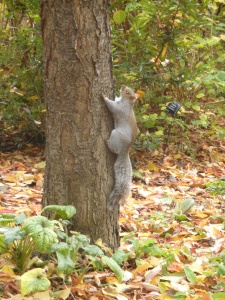 Illuminating the layers of leaves, there are some patches of cyclamen and autumn crocus.  We are drawn to them – as if, like bees, we need to suck up their nectar to store against the winter dark.    At the southern corner, joining Thompson Road, we climb back up into the centre of the garden, past the sweet little South Lodge, set like a Wendy house by the side of the path.  All the buildings in the garden were designed to to be pleasing to the eye and add to the illusion of a ‘natural’ landscape, even though every square inch is clearly carefully managed by the curator and his crew of gardeners and the fleet of volunteers. 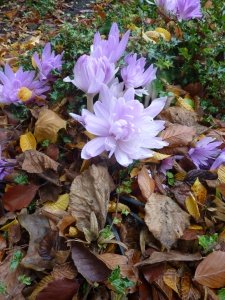 The heart of the garden is marked with a cast iron fountain, a heavy Victorian design, more interested in engineering than beauty.  But the energy of the cascading water is undeniable, refreshing and vigorous, and provides a focal point at the end of the Broadwalk.  Bordered by beds of herbaceous plants, this is a place to promenade, people-watch and take the air with family and friends. 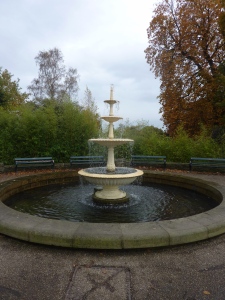 A rather offputtingly named AGM Garden showcases plants that have been awarded the RHS ‘accolade for excellence’.  Sheffield houses the National Collections of Weigela, Diervilla and Sarcococca – shrubs that wouldn’t look out of place in a suburban garden.  The Marnock Garden, named after the original designer, is an area intended to inspire visiting gardeners with ‘ideas to take home’, particularly involving tender climbers and scented plants.  There’s a wooden sitooterie in the shape of an apple and a silver insect nestling among the plants.  A circular raised bed shows fragments of terracotta leaves, imprinted with words no longer legible, part of a poetry trail.

The Evolution Garden reflects the impact of the publication of Darwin’s Origin of the Species in 1859.  A series of signs direct the visitor to pay attention to how and when plants and animals appeared on the planet and evolved into the arrangement we’re familiar with today.  There are several examples of fossilized trees, clearly reminding people of how much longer plants have been on the earth than man. 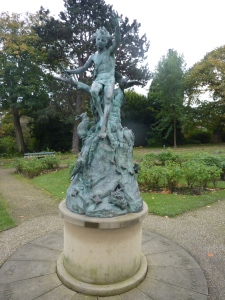 The statue of Pan next to the Rose Garden is intriguing. This version is slightly sanitized, with human legs rather than the hairy haunches of a faun.  More Peter Pan or St Francis than satyr, he is surrounded by his friends, the birds and the mice, bronze worn shiny from much stroking by passing children of all ages.  A god of nature, Pan was earthy and sensual, unrestrained in his appetites.  Sexually predatory, he even managed to seduce the Moon, Selene.  From his name we get the word ‘panic,’ originally expressing the terror experienced in wild and lonely places.

We leave the garden by the turnstile gate.  I want to find the sign that says ‘Botanical Road’.  It sounds strangely literal, like so much in this garden, straightforwardly informative, like ‘Station Road’ or ‘School Lane’.  But in my mind it summons up images of plants and flowers, burgeoning and irrepressible, cleaning our air, stabilizing our soil, providing food for our bodies and minds, lifting our spirits with their natural beauty.  I take a photo, aware I want it to be a talisman, a signpost directing me on the course of my botanical adventures. 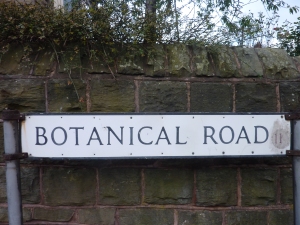 3 thoughts on “Garden in the City of Cutlery”